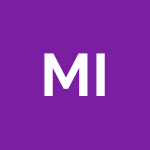 Do you have questions for Millicent?

Log in to ask Millicent questions publicly or anonymously.

Not as sweet as you

The system is busy

Bring down Satan, Your Highness -- The morning light is dim

So the sword is deeply in love.